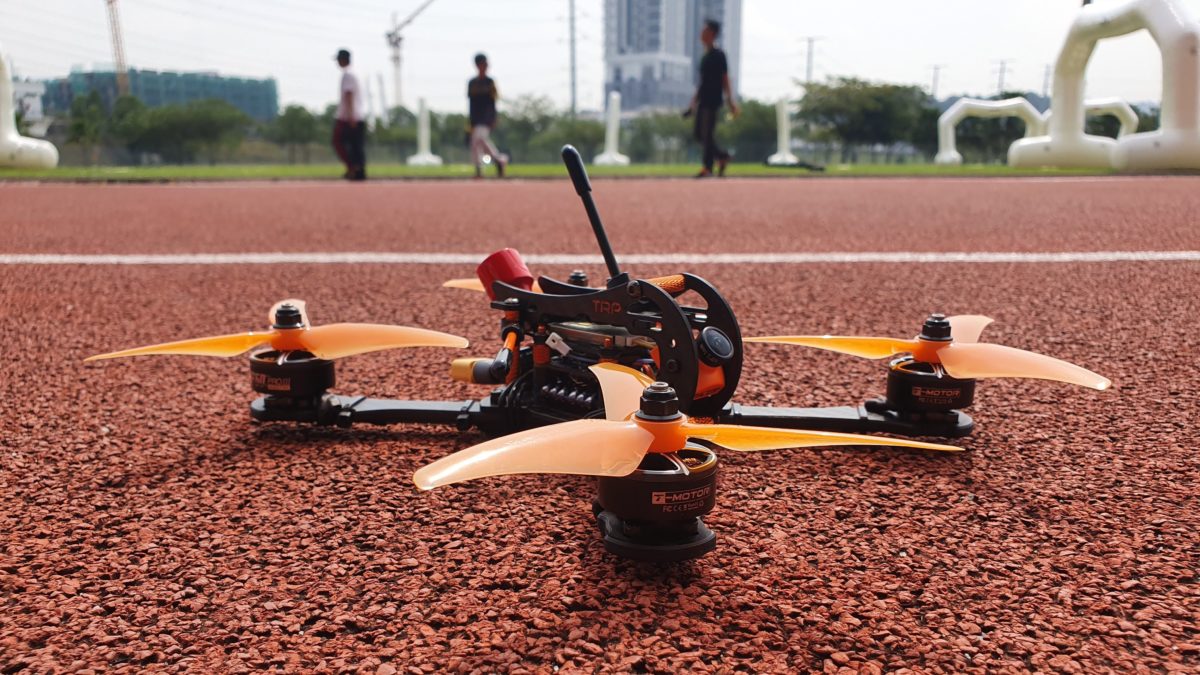 Presenting to you the TRP Sprint , designed and produced locally by Total Rotor Performance ©.

The TRP Sprint builds onto its predecessor; the TRP V2, after months of feedback and requests given by its users. It addresses the major issues that the TRP V2 had :

That being said, having flown the TRP V2 before, it is still a frame I highly recommend it as it was an absolute tank, and could take hit after hit without any delaminations or breaks.

Now, let’s get into unboxing the frame!

The frame kit comes in a very nice eco-friendly cardboard box, with Total Rotor Performance© labels. Opening the box, you’re greeted by a vacuum sealed packet, in which the carbon parts are packed. There are 2 separate anti-static bags filled with hardware that goes with the frame. Lastly, there is a guide on assembling the TRP Sprint, with an exploded view of the frame.

And here are the contents! I found it nice that they threw in a 3D-Printed Antenna Mount for both a standard diversity receiver like the FrSky R-XSR, and a TBS-style SMA pigtail for the VTX antenna, along with antenna tubes and caps. I also like the transparent battery pad that they provide too. It’s a pretty sizeable piece so you can cut it in any size you need, and its more than enough for mounting a battery on the frame.

The T700-grade carbon fibre used for the TRP Sprint is made by Mitsubishi, and the quality and finish is really something else. There are no rough cuts, no burrs, not even a speck of carbon dust! There’s even a nice fruity scent, and I was told that it comes from the top coat of the carbon!

And here it is, assembled!

Right away, you notice the orange hardware that’s being used. I should stress that those are specially ordered and does not come with the frame kit. This is a tradition for all my builds that I post on RotorBuilds, hence why the tag “OCD Edition”. Frankly, I spend way too much time in the small details; specially ordering non-standard hardware, and of course, the build itself.

You can tell that the frame is well-designed as you assemble it for the first time. One feature of the frame especially stands out. Notice that each arm has a little notch near the motor mounting holes. That is there for the motor wires to fold down and run along the underside of the arm. For the cost of a little extra weight, one can mitigate the risk of cut motor wires. You may check out the photo gallery for an illustration, as that is how I run my motor wires now! Also, after fully assembling the frame kit, you can get a feel as to why the TRP Sprint is so maintenance-friendly – Two M3 screws at the rear of the frame are all that stands between you accessing the electronics stack.

Thoughts about the TRP Sprint

The TRP Sprint is indeed lighter than the TRP V2, With a raw weight of 84 grams with hardware, it is still considerably heavy compared to today’s race frames. However it does make up in terms of stiffness and durability. This is one of, if not the stiffest sandwich-style racing frames I’ve ever got my hands on. It translates to a “locked-in” flight feel right off the bat, even with stock settings on Betaflight 4.1.0, which is something I’ve never experienced before.

With an effective arm width of about 12mm, the 4mm thick arms are unlike the thin, slender arms of other racing frames today. But, I think that Total Rotor Performance© has found a nice balance between strength and weight, though I believe it can be pushed further in this area. Having returned from the Asia Drone League 2019, where there were gates of different types (notably PVC and metal bars), I’m happy to report that the TRP Sprint has survived the impacts, which goes to show that it does live up to the durability of its predecessor.

The TRP Sprint flies amazing, and excels at both high-speed and tighter, technical tracks. There is something about this frame that stands out above all other frames I’ve flown in terms of flight feel. The combination of its light weight and stiffness makes it incredibly nimble, making sharp turns a breeze. Other quads I’ve flown would skid away from the Apex of the corner, the TRP Sprint on the other hand, is able to keep close to the Apex of any corner. Right now, the only limitation it has at the moment, is the pilot (me). As of writing this post, I’m still getting the hang of flying it. It’s been going great, but I know I can hone my skills further with such a beast of a frame.

Check out my flight video from the recent Asia Drone League 2019 below!

Drawbacks? It does have some. The first of which being that the stack screws are not independent unless you are running a 20x20mm stack. One of the 2 screws that the arms are bolted through is for the 30x30mm stack, which does make it a pain if you use the long M3 stack screws of more than 25mm in length. Though, if you run a 30x30mm stack like I do, the frame kit comes with M3x16mm YFS screws. Paired with some Matek M3 Bobbins (yes, I’m bringing them back), and your ESC & FC stack is sorted. Check out the photo gallery to see illustrations of what I’m referring to. That being said, I can foresee arm changes to be a pain. A specially made M5.5 spanner would definitely help in making arm changes quicker. (I hope you are reading this post, Total Rotor!)

Another problem is that the horizontal standoffs are 20mm in length, which is 1mm longer than the standard width for micro cameras (19mm). They do provide 4 pieces of M3 washers that are 0.5mm thick, 2 for extras. Using one washer on each side of the camera makes up the 1mm gap between the camera and the cage which solves the problem. That being said, installing the camera is still a little bit of a hassle, though.

Conclusion : Should one get the TRP Sprint?

If you are a racing pilot, I strongly recommend that you give this frame a try today. Despite the two cons that I highlighted above, the pros more than make up for it. The quality of the frame kit, ease of building and maintenance, stiffness, & durability that the TRP Sprint delivers is second to none, especially for the price (US$72.13). If you have any questions about the frame, do let me know your thoughts by commenting below!

Click here to pick up your very own TRP Sprint today! 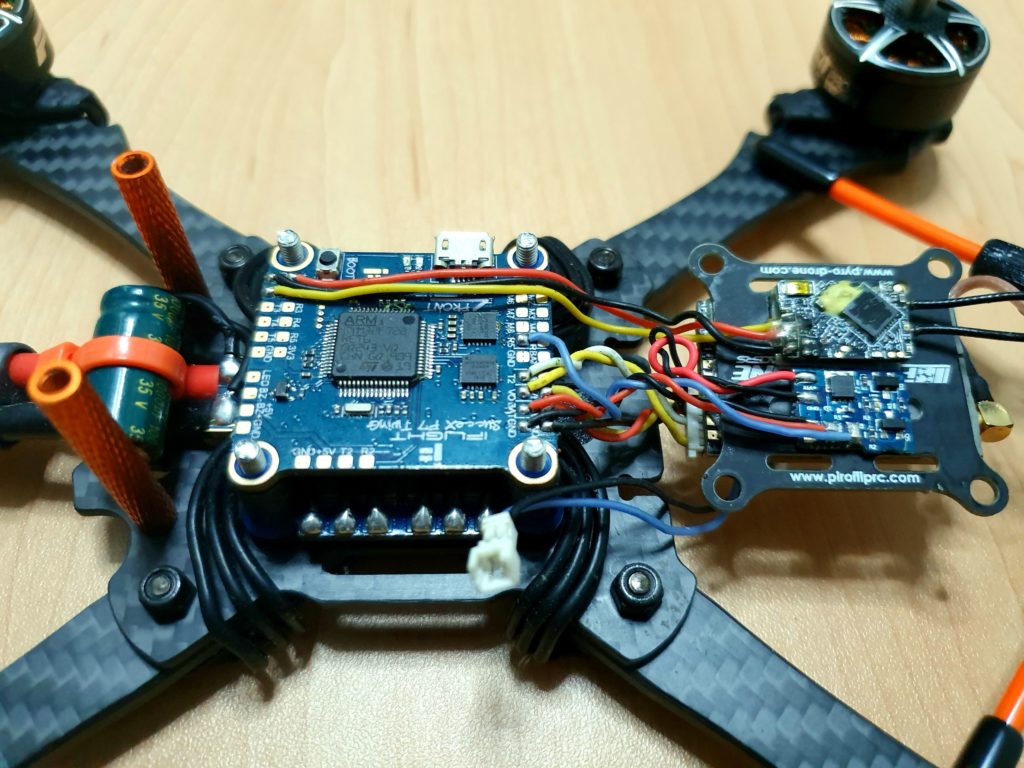 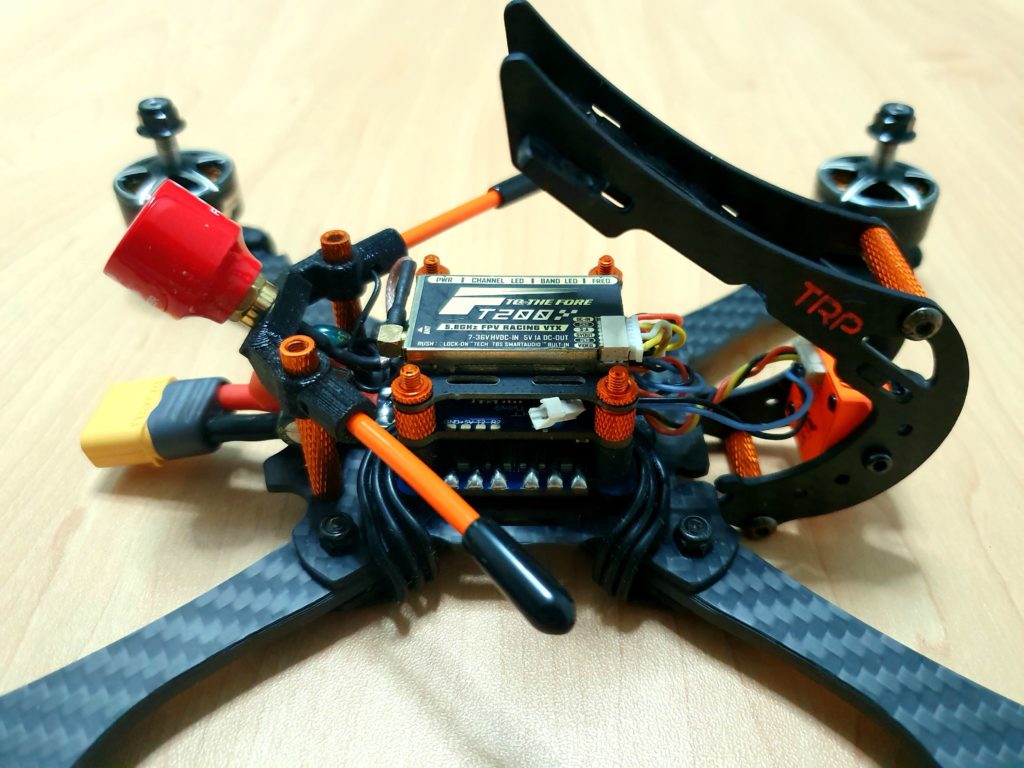 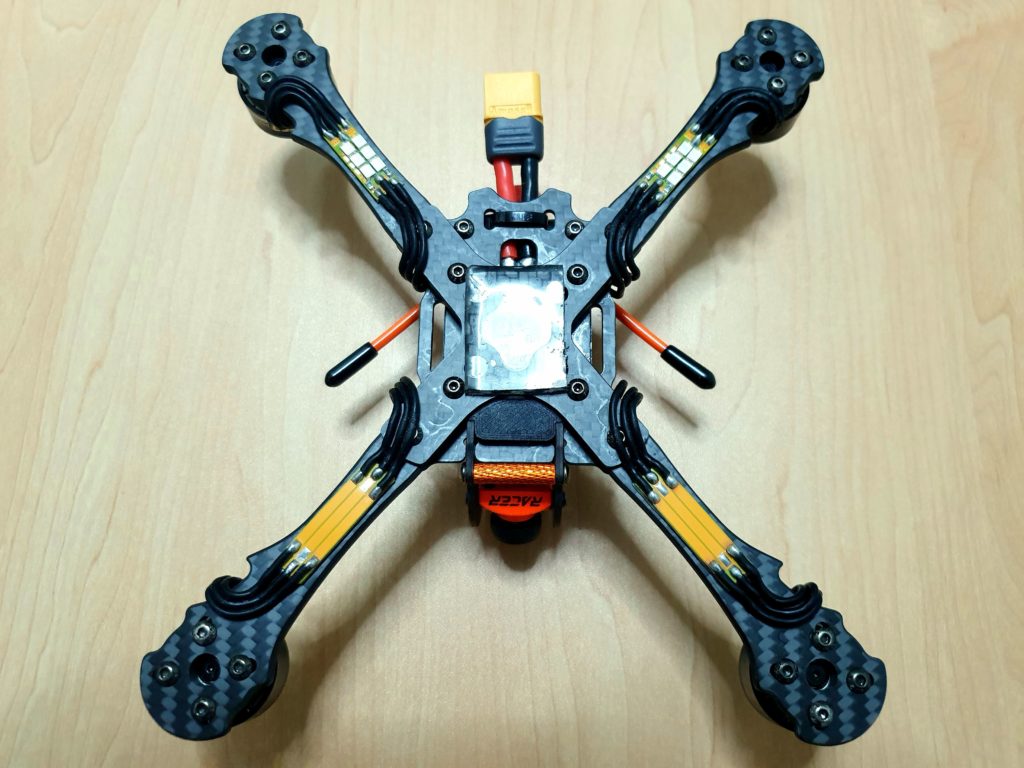 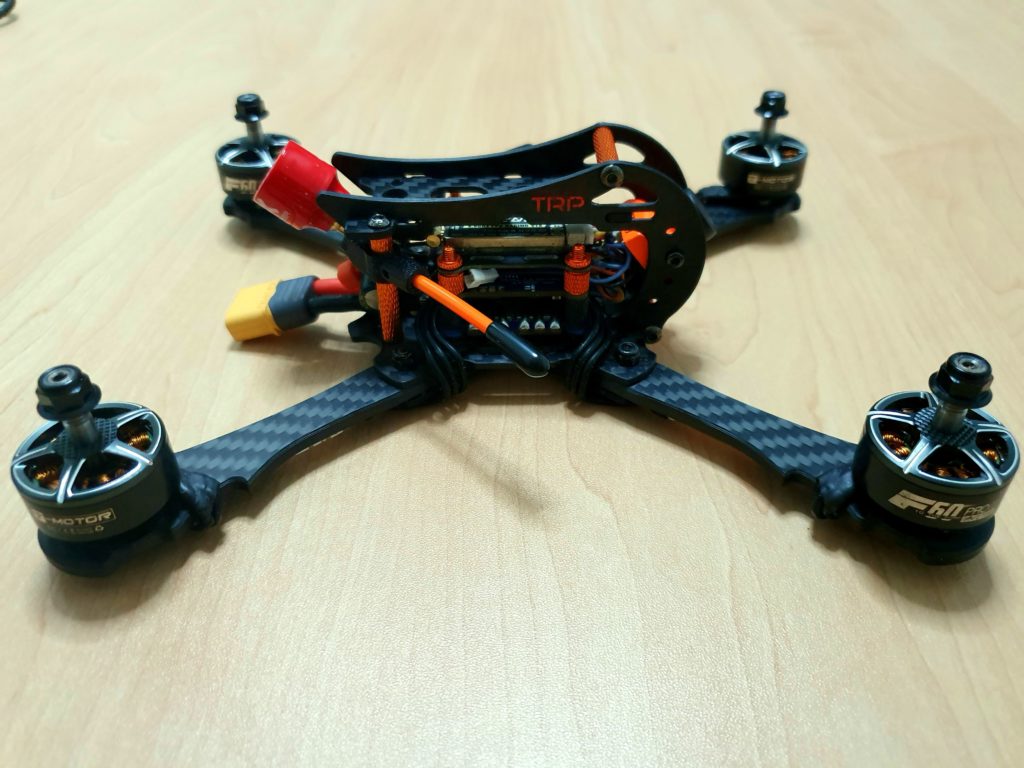 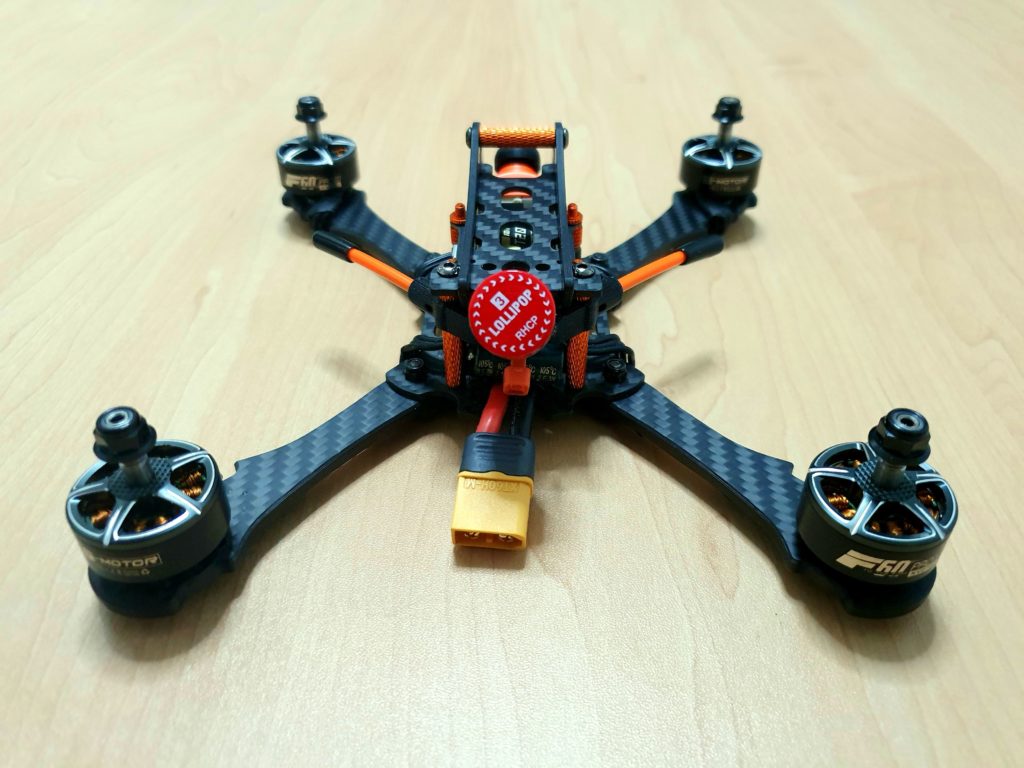 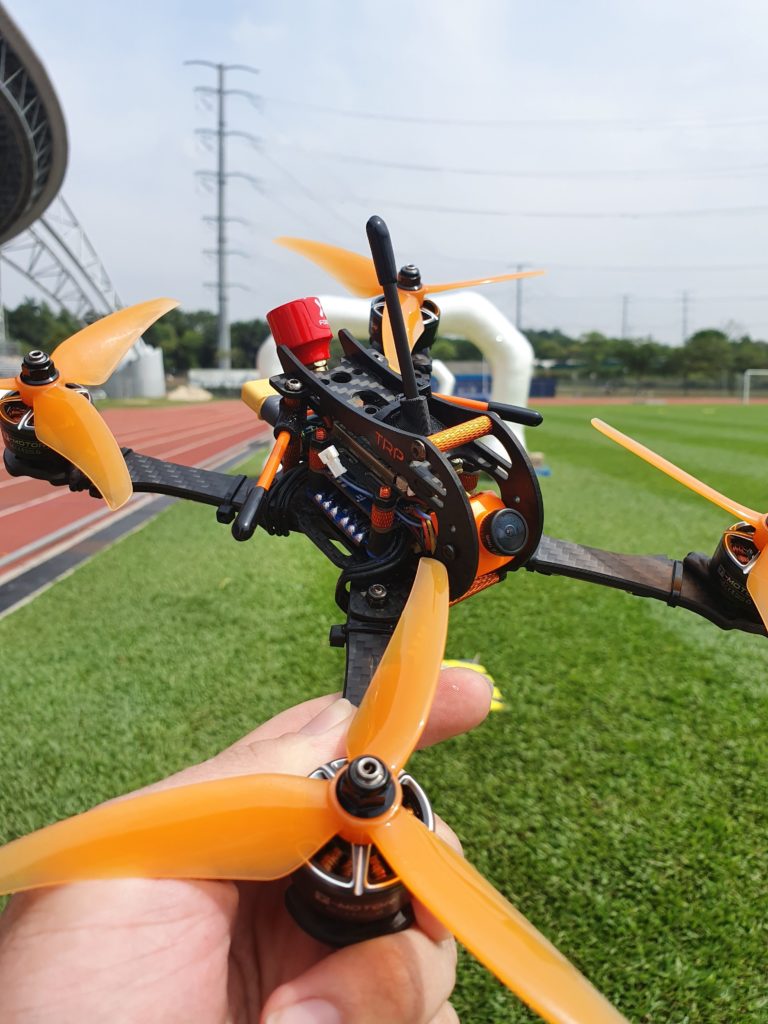 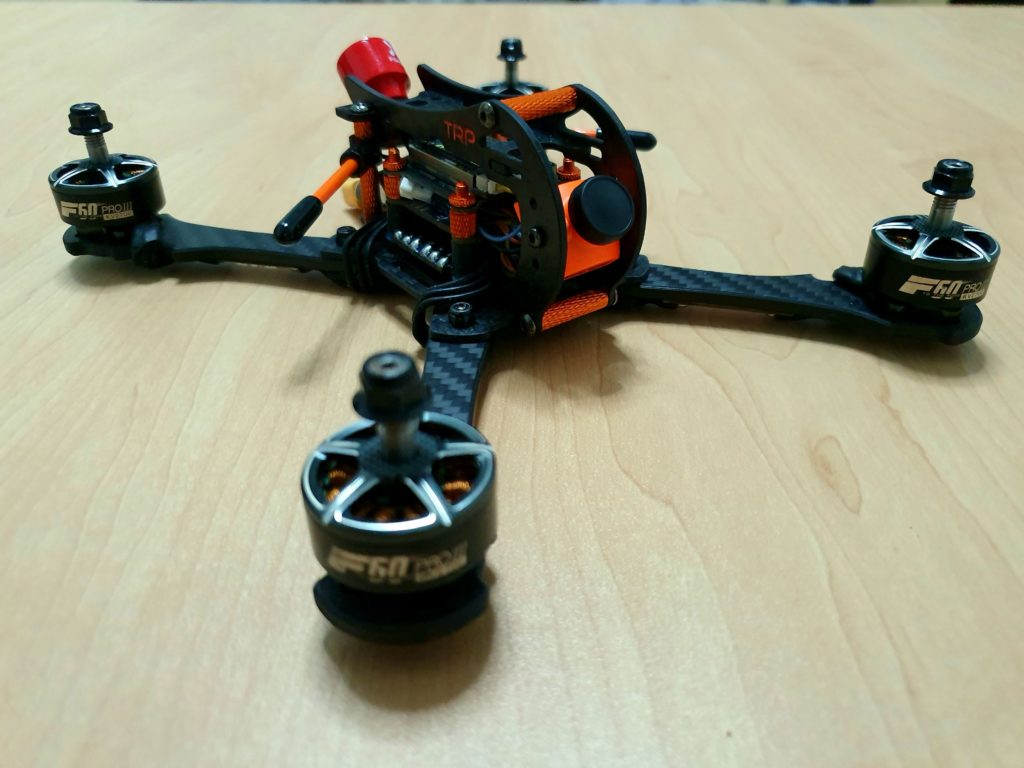 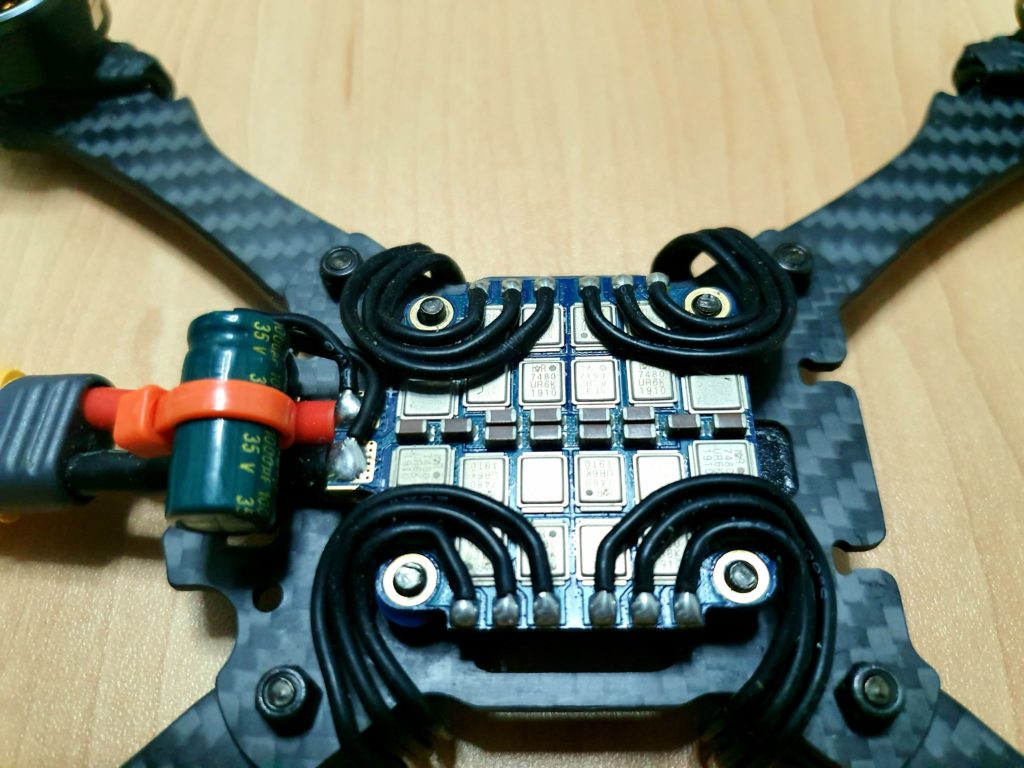