Build A Smoke Stopper For Mini Quad and Drones – By OscarLiang 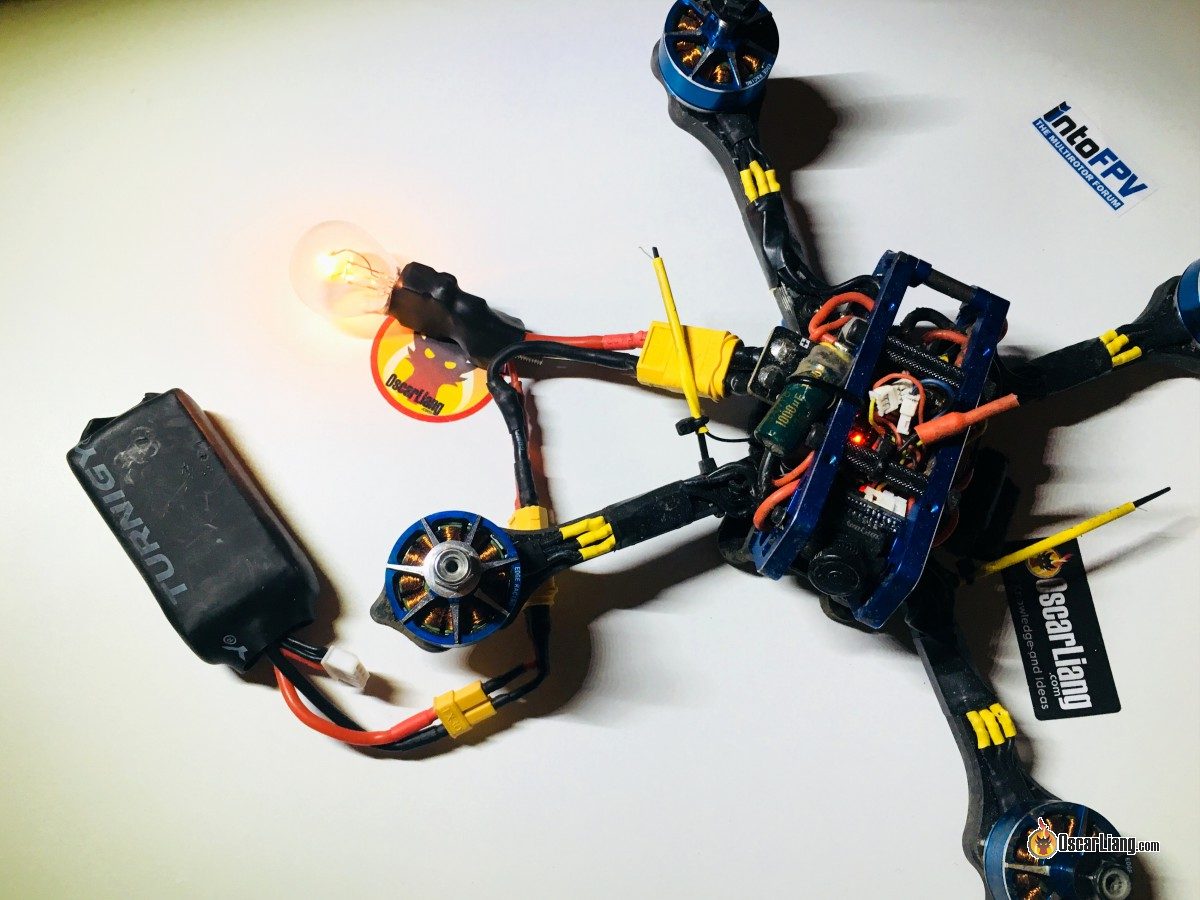 A smoke stopper can help avoid damage when you power on a mini quad for the first time. Sometimes you might have a defective part or a short somewhere, the smoke stopper can limit the current flow and prevent “magic smoke”. In this tutorial I will show you how I build a DIY smoke stopper.

The DIY smoke stopper was created by “mnemennth”, link to his thread on RCG at end of this tutorial.

Apart from testing RC models for the first time, a smoke stopper is also great for flashing ESC’s. When error occurs during the flashing process, there is a chance all the FET’s on the ESC might turn on at the same time, creating a dead short.

Too lazy to build your own? You might want to consider the “plug and play” PPTC smoke inhibitor.

How does a Smoke Stopper Work?

A carefully chosen light bulb can turn into a great over-current protection device. Connect it between your battery and quadcopter, so only a small amount of current is allowed to pass through, enough to illuminate the bulb but no more.

It saves your electronic components from current surges, and gives you a chance to troubleshoot the failure without having to replace the burnt-out parts.

What’s the Current Limit of a Bulb?

The light bulb turns on when there are enough amps going through the filament, but it restricts the current flow at its rated power. The current limit of a light bulb can be estimated as:

Note that if there is a short in your quad, the current surge might be large enough to blow your bulb, it’s a fuse essentially.

Parts to Build the DIY SmokeStopper

Here are the parts I used to build my smokestopper: Do you see that the 3157 bulb has two power rating? That’s because it has two filaments inside, one for higher current and the other for lower current. That’s why we are using a switch to select which filaments we want to use for different testing.

Wire gauge doesn’t matter since the device is designed for up to only 3A of current. Use any spare wires you have, preferably 20AWG or larger.

Here is the connection diagram provided by mnemennth. Note that there are 4 legs on the bulb, 2 legs on each side. The two legs on the outside controls the high current filament.

Lift and bend one of the legs to the opposite side. The leg spacing on the switch is just wide enough to be mounted on the bulb directly, that’s super handy for soldering 🙂 Of course, if you don’t want to do this, you can also use wires between switch and the bulb.

Now solder the switch and wires on the bulb according to the wiring diagram. To secure the wires and switch, it’s best to apply some hot glue. Finally put the heatshrink on. It was pretty easy to build the smoke stopper, took me about only 20 mins to complete 🙂

How to use Smoke Stopper?

Because these light bulbs are rated for 12V, it’s recommended to use 3S LiPo for testing. The creator said it’s okay to use up to 15V, so an empty 4S pack might also work.

When plugging in battery for the first time to your newly built quadcopter, always start with the “Low Current” mode to test all your accessories. It’s a 7W filament and only allows about 500mA of current to pass,  about enough to power up the FC, and initialize the ESC’s.

This is great for testing micro and nano quads, but it might not be enough to test larger quads especially when you have power hungry VTX or bright LED’s. If the bulb lights up and your FC and ESC’s keep restarting, you might want to disconnect the LED’s and VTX.

Once you’ve confirmed the quad is working under “Low Current” mode, you can now switch to the “High Current” mode (27W), with everything connected on the quad. You can check if the arm switch works, if the motors spin, and if the quad responds correctly to the sticks on the bench and so on.

If there is an electrical short, the bulb will light up brightly. Note that the SmokeStopper is NOT “Bulletproof”. The bulb only limits the current and doesn’t stop it. If you wired the parts incorrectly in your mini quad, the small but continuous current flow can still damage them.